The 2019-2020 NHL Season has reached it's All-Star break, so I thought it would be a good time for another goalie gear post (previous posts here and here).  Below are some NHL goalies whose gear have caught my eye this season, either for using a non-white base colour or interesting graphics.

Note: Some goalies used the exact same design as last year at some this season (like Petr Mrazek or Jimmy Howard), so those pads aren't included in this post.

Darcy Kuemper (Third Jersey set)
Black, with brick red and hunter green accents, and the Coyotes "kachina" pattern along the edge.  Are these better than his set from last year?

Antti Raanta (Third Jersey set)
A throwback design for a throwback jersey.  It makes sense, and it works!

Linus Ullmark (50th Anniversary set)
White, with Buffalo's "golden anniversary" logo and a gold sabre.  Not a conventional look, but it is unique and I quite like it.

Petr Mrazek
Black, with white and red accents.  The addition of white is an improvement over his pads from last season (a design he's switched back to).

Corey Crawford
Black, with red accents.  One of two sets of pads he's worn this season.

Black, with red and white accents.  These pads only made a brief appearance, but the glove and blocker have stuck around.

Black, with red and white accents (and yellow and also green).  Less colourful, but looks just as good.

Elvis Merzlikins
White, with a skyline, the Ohio flag, and some red (there's also a hidden cannon logo at the top of the pads).  A very well designed set!

Jimmy Howard
Red, with white accents.  Sharper looking than his set from last year (which he wore well into this season).

Juuse Saros
Yellow, my favourite colour for goalie pads.  Different than his yellow pads from 2018-19, but not by much.

Henrik Lundqvist
White, with a blue and white lady-liberty, a blue skyline, and some diagonal streaks.  A good evolution of his design introduced last season.

Carter Hart
Black, with orange accents.  Only worn for a few games near the start of the season (I think), which is a shame.

Jordan Binnington (Throwback Jersey set)
Blue, with red and yellow accents.  The jersey is fun, this gear looks great, and the "CuJo" mask is awesome!

Andrei Vasilevskiy (Third Jersey set)
Black, with silver accents.  More silver than his partner in crime, but both these sets look nice.

Thatcher Demko (Throwback Jersey set)
White, with diagonal black and yellow and red stripes.  The pads look nice, but the flying-V sweaters look amazing!  The Canucks need to wear these in a game sometime soon.

Garret Sparks
White, with jagged grey and gold and black and red accents. He's mostly been in the AHL which is too bad, I want to see these pads more often!

So those are the NHL goalies whose gear have impressed me so far this season.  Let me know in the comments if there are any other goalies I should include on this list.

Thanks for stopping by, and enjoy All-Star weekend!
Posted by Steven Grant at 1:35 PM No comments:
Labels: Goalie Gear, My Thoughts 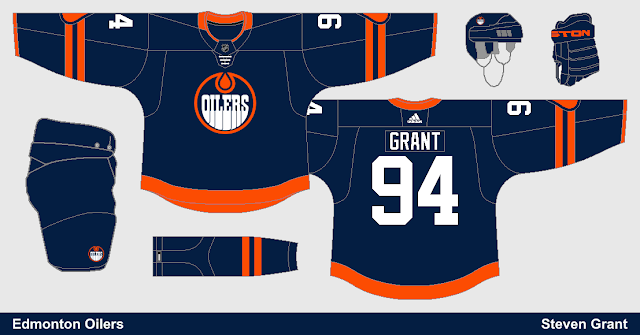 Just a quick post today with my take on the Oilers leaked third jersey.  I added back some white to the logo and numbers, and I also added an oil-drop to the sleeve stripes.
Posted by Steven Grant at 4:03 PM No comments:
Labels: Oilers 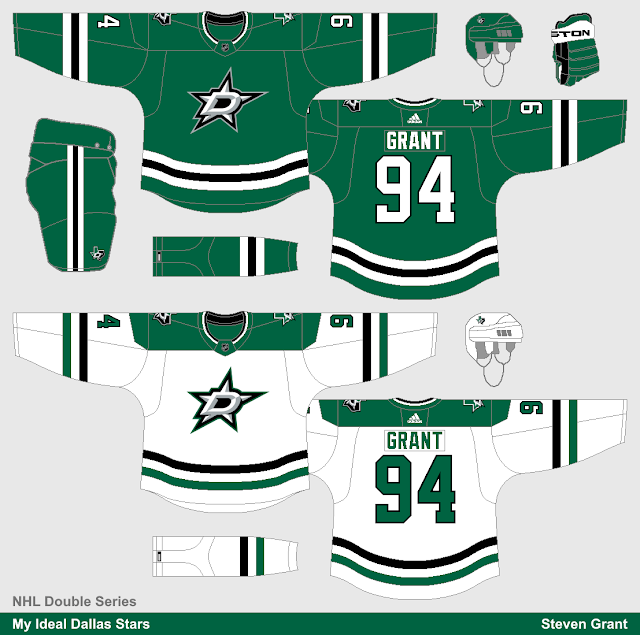 I like the Stars current jerseys but I think they'd benefit from some changes.  I made the equipment green, used their Texas-shaped logo on the shoulders, added an outline to the numbers, changed the collars, tweaked the shape of the yoke, and raised the home jersey's hem stripe. 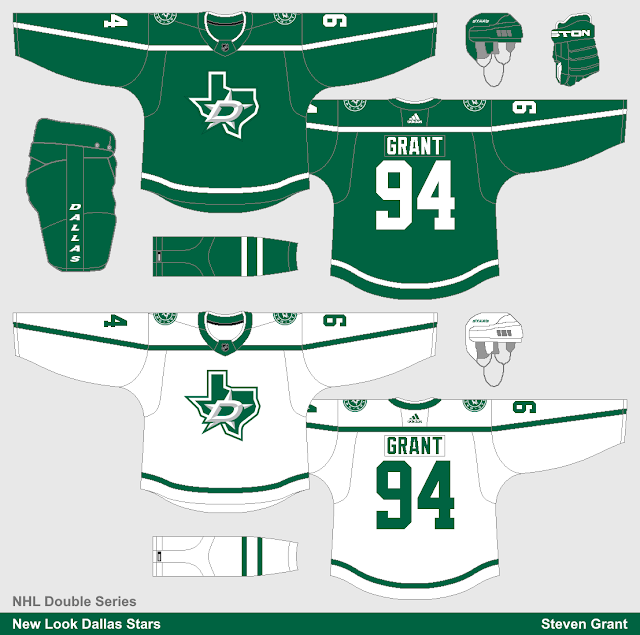 The equipment is also green for this next concept, but that's because I ditched black all together.  I used a simple/minimalist striping pattern, promoted their Texas-shaped logo to the primary logo, and brought back the "DALLAS" script on the pants. 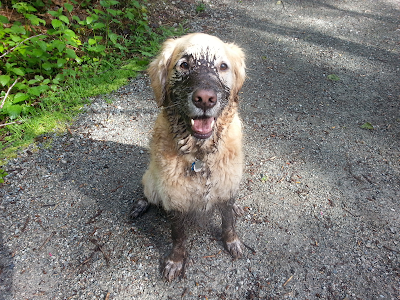 Unrelated to this post, but on my secondary blog (Snapshots with Steven) I recently posted some photos of my family's dog Luc.  He passed away earlier this month at the age of ten, so I'm sharing my favourite photos of him as a way to celebrate his life.

Thanks for visiting, and enjoy the rest of your week!
Posted by Steven Grant at 11:09 AM 2 comments:
Labels: NHL Double Series, Stars 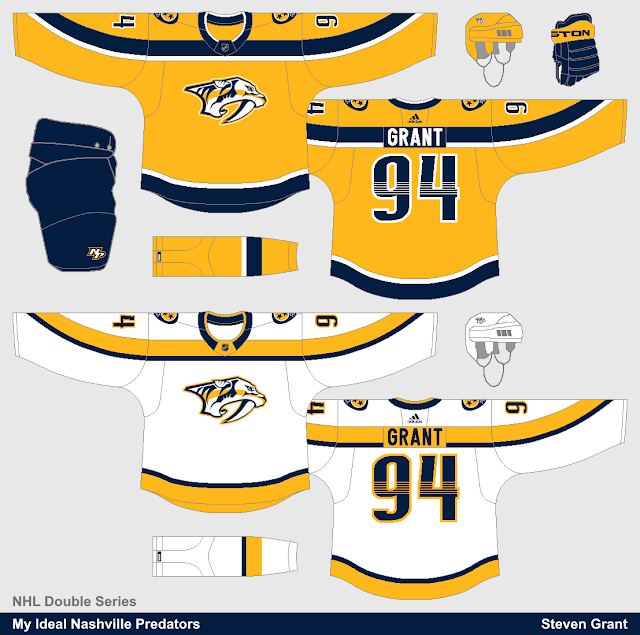 The Predators made a great decision back in 2011 when they updated their logos and switched to yellow as their primary colour.  However, I also loved how unique the striping pattern of their original jerseys were, so I tried to bring a bit of that back with this concept (I made a similar concept back in 2013). 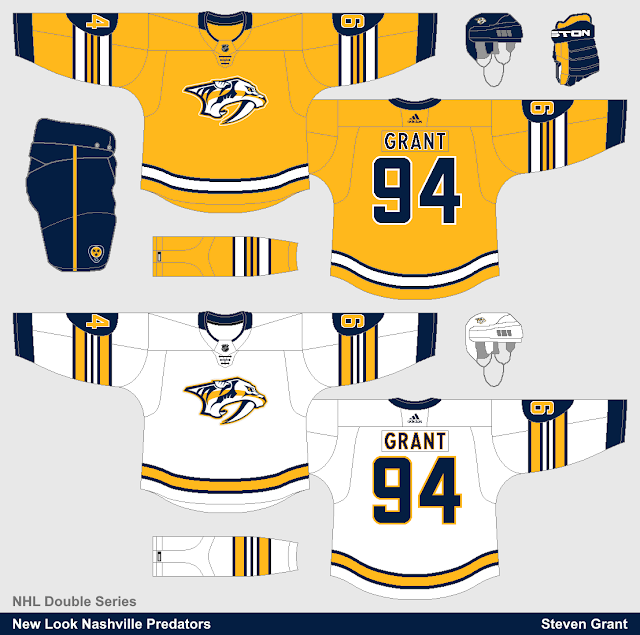 My idea with this concept was to place the sleeve numbers in a guitar pick shape, and place those over top of the stripes.

Have a nice day!
Posted by Steven Grant at 11:04 AM No comments:
Labels: NHL Double Series, Predators 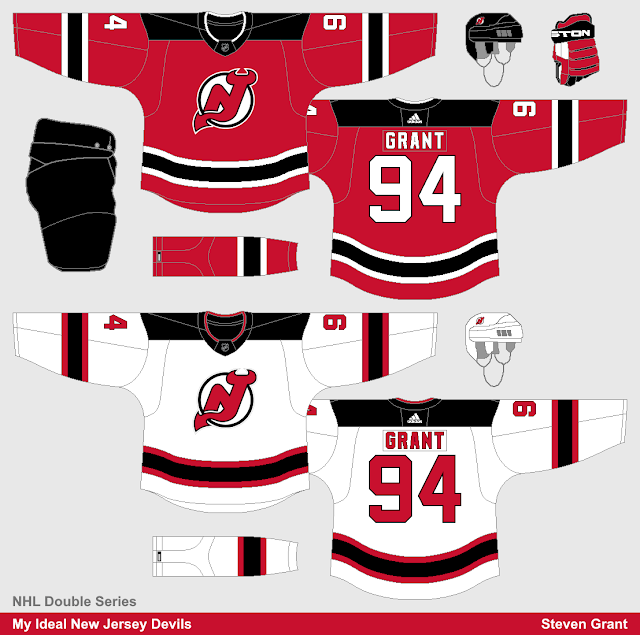 These are just the Devils 1992-2017 jerseys transitioned to Adidas, without any unnecessary changes. 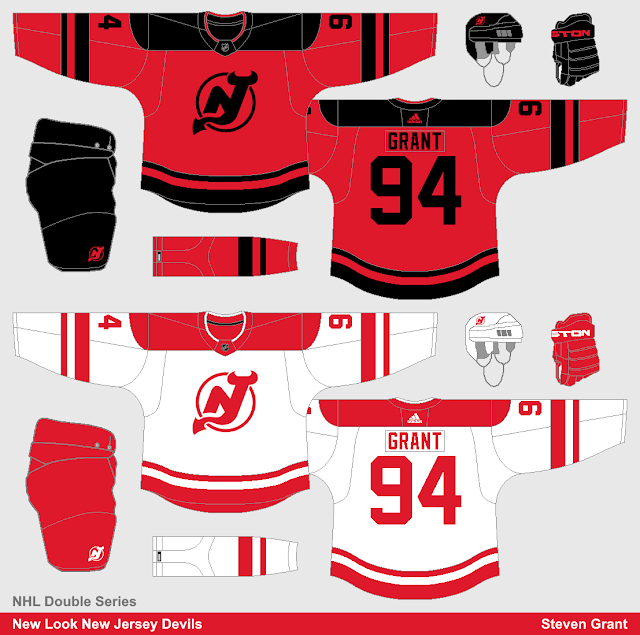 Now we go from a timeless look to a more trendy design.  I brightened the shade of red, and eliminated white altogether from the home jersey.  The white jersey has no black, and gets its own set of pants and gloves.